Michele Bachmann to leave Washington to spend more time with her "family".  Prompts the resurrection of FRIDAY FOLLIES.  (What?  Every Friday?  Uh. . .we'll see how it goes.)

So Michele Bachmann is leaving her fancy, paid position as a Representative of Only Certain Teapartiers, One Percenters and Planetary Aliens.  She is not pulling a Palin--quitting--but will not seek re-election in 2014.  This is good news for some, but you will not be astonished to learn that there are still folks--Glenn Beck among them--who are wailing over the treatment of this poor, misunderstood Minnesotan.  If she had been given her due respect, she might well still be in congress years from now, maintaining her impeccable talk-silly, do-nothing record.

But all is not lost.  She will be on the taxpayer dole until January, 2015, which should give her plenty of time to wow us with more of her wacky whoppers.

I guess you've heard that famous designer Michael Graves partnered with famous department store J. C. Penney and came up with the subversive idea to make and sell a tea kettle that looks like famous monster, Adolph Hitler. 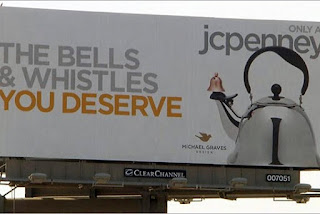 I'm not putting up a picture of Hitler, but if you look hard at that black dip on the handle, it'll begin to look like a long black bang swooshed to the side, and if you pretend the black rounded handle is a short, fat mustache, and then consider the spout as a raised arm signifying "Heil!", you will see what the mayor of Culver City, CA saw.  The mayor of Culver City saw Hitler up there on that billboard and he was furious!

The execs at J.C. Penney may or may not have seen it, but they took the billboard down tout suite, and have removed any pictures of the offending tea kettle from their online catalogue--but not before they sold out those teakettles completely.  (No word yet on what Michael Graves thinks about all this but would I LOVE to be a fly on the wall at his studio right about now!  Still--they did sell out.  Completely.)

So it's not just American icon J. C. Penney in hot water these days, now the Heart Healthy cereal, Cheerios, has done it, too.  The parent company, General Mills, actually thought a commercial featuring an adorable girl-child, the product of a clearly identifiable interracial couple, would be okay in the 21st Century.  Ha!  The racist ignorami came out of the woodwork and spewed such crap the comments had to be disabled on YouTube.  It was as if they were just waiting for something like this.  Because, you know. . .


The website Mothering Justice published an online newspaper called The Mackinac Chronicle the other day, and it was shocking.  It showed Michigan politicos in a light I hadn't seen since the days before a bunch of rich con men convinced a bunch of dumb yahoos that the way to be patriots was to usurp the words "Tea Party" and help the rich con men take over the country by obstructing any kind of forward movement, thereby encouraging the entire nation to just give up and become a wholly-owned, for-profit venture. 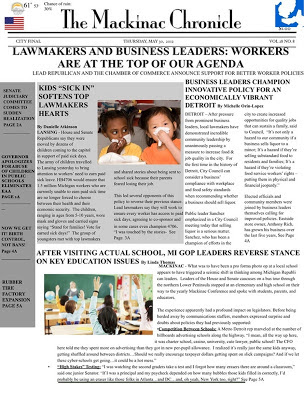 The headline read, "Lawmakers and Business Leaders:  Workers are at the Top of Our Agenda".  Atop the picture of two adorable minority kids the headline read:  "Kid's 'Sick-In' Softens Top Lawmakers Hearts".  The story below the fold promised, "After Visiting Actual School, MI GOP Leaders Reverse Stance on Key Education Issues."

It was as if the long nightmare--the Siege of Michigan--was over and the duly-elected sell-outs had come to their senses and recognized the need to forget about those damned Koch Brothers and actually abide by their job descriptions.

This next one isn't really funny and maybe shouldn't even be here, but it's disgusting in a weird way, so here it is:  The Chicago Sun-Times has laid off (read "fired") all of their staff photographers.  All of them.  All 28 full- and part-time staff, including at least one Pulitzer Prize-winner.  A big, big city newspaper with no staff photographers has to be a first anywhere in the world, even including those ignominious Third World countries we've pointed our fingers at so often throughout our own glorious past history.

But apparently, here in 21st Century America--a century that will live in infamy--getting rid of talent to satisfy a bottom line preferring to service the no-talent CEOs at the top is becoming the accepted norm:


The move to have reporters shoot video and photos while covering stories is a growing trend among television stations and newspapers, according to California-based media analyst Alan Mutter, who said quality may be sacrificed in the process.
"We'll always have a lot of pictures — there will always be something between the articles — but will we have great photography, the memorable iconic images? Probably less so," Mutter said.

So it's settled.  We've become a nation half full of idiots and instead of fighting them we're looking for new and better ways to pander to them.  Probably in hopes that we'll all become them someday.  All except that noteworthy Koch-addled One Percent.  They'll be in charge.

Hey! Whoa!  Stop that!  Friday Follies is supposed to be FUN! (Enough with the exclamations already. That's my quota for the week, I swear.)

Now for the Moment Sublime:

Pencil drawings by Erica Rose Levine.  Scroll down her Facebook Page for more. (H/T to Jezebel, who wrote about her first.) 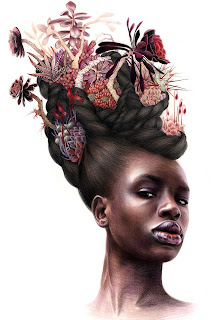 And because I haven't done these for a while, here's another Moment Sublime.  The sidewalk art of Michigan's own David Zinn: 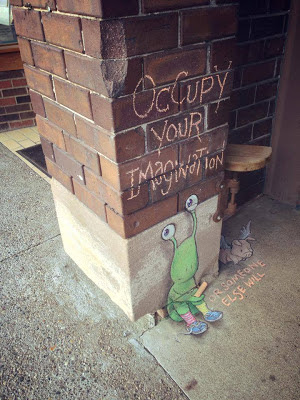 Cartoon of the Week