You have to hand it to those Republican legislators in Michigan, my beautiful, besieged state.  I swear, they must stay awake nights trying to think up ways to protect our wicked womanly bodies from the fools who happen to own them.  (That would be us, ladies.)  In late December, Gov. Snyder (R) signed a bill handed down by the Republicans setting strict limits on clinics providing abortions, in hopes they couldn't comply and would have to shut their doors.  In that same bill, doctors would now have to have a conversation with the patient, asking needless questions of mostly mentally competent women about whether or not they had been coerced.

These same Michigan Republicans, having already thrown their weight around, passing an unpopular, unprecedented Right-to-Work law in the state where labor successes made it the birthplace of the middle class, and then going against the voters to reinstate the hated emergency manager law, have again turned their sights on that old standby attention-getter, the fertile womb.

You would think they might have other, better things to think about, considering it's the year 2013 and they haven't quite scaled all the walls of the castle yet, but here they are, socking it to us one more time with a new anti-abortion bill that includes forced ultrasounds, forced heartbeat recordings, forced lectures, forced permission slips, forced 24-hour cooling off periods--all in the interest of taking care of the little women who obviously can't even begin to fathom what's about to happen to them.

Yes, on Tuesday, February 5, 18 Republican men and three Republican women put their signatures to House Bill 4187, wherein they take on the thankful task of coming as close to banning abortion as is politically possible in this, the early part of the 18th 21st century.

In the very first paragraph they let us know right off that whatever the hell the Federal government agreed to in Roe v. Wade, here in the the great state of Michigan, all bets are off:


Sec. 17014. The legislature recognizes that under federal constitutional law, a state is permitted to enact persuasive measures that favor childbirth over abortion, even if those measures do not further a health interest.

And that's just the beginning.  Let me grab one more section here--the highlight of the entire bill.  The ultrasound part:

(All caps and bold was their idea.  I had nothing to do with it.)

Well, I could be picking out juicy parts all over the place but I'll leave it to you to read the rest of the BS, while I get to the (seemingly) good part.

Something (seemingly) big happened yesterday (Thursday, Feb 7, 2013).  Something that could potentially change everything.  Speaker of the House Jase Bolger came out and said there would be no bill from the House that would require invasive, transvaginal ultrasounds.

And cheers were heard for miles around.  I mean!  The Republican Speaker of the House!  Said no Transvaginal Ultrasounds under his watch!  Lordamighty!

House Bill 4187 doesn't use the word "transvaginal".  It's not anywhere in there.  So what is Speaker Bolger talking about when he says so carefully, "While I want to be sure women have access to the best technology available, I have absolutely no interest in forcing a woman to have a transvaginal ultrasound."

That's what he said.  So why, in the heat of this glorious first, a moment when a Republican leader-man in Michigan actually comes out in defense of women. . .why am I so, so suspicious?

Because it's Michigan and it's the House, and they're Republicans and we're talking about abortion.  Speaker Bolger didn't say he had absolutely no interest in forcing a woman to have an ultrasound.  No, he said, very specifically, a transvaginal ultrasound. 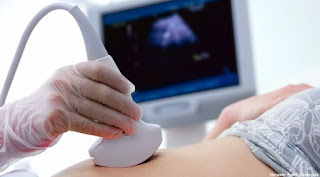 So now we wait.  The shoe will drop from that other foot.  Mark my words.
Posted by Ramona Grigg at 9:34:00 AM