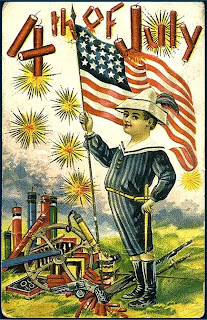 Somewhere along the way we stopped calling our most popular summer holiday "Independence Day" and went simply with "The Fourth of July".  We love our Red, White and Blue, but this is the day we pull out all the stops.  Flags fly everywhere, the stars and stripes adorning everything from porches to paper plates to Uncle Sam hats to the holiday advertising pages of every newspaper.  Flags dress floats and bicycles and baby carriages in every parade in every little town in America.
We love this day--the day to remember our liberty, our exceptionalism, our prosperity.  Those were the days, weren't they?
So what happened?

Today, it's one of those days when the sun is warm, the breeze is balmy, and the shade of the old oak tree brings a delicious coolness.  A lemonade day.  A day for feeling good. The parade is about to start and there is no more beautiful flag in the world than the American flag. 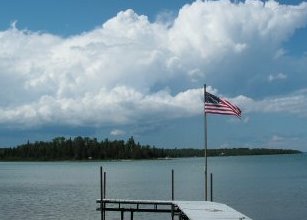 So tomorrow we'll begin again.  Toward a more perfect union.  Toward more than just a day of domestic tranquility.  Toward an independence we, the people, promised to preserve.