Don't take your guns to town, boys. There's nobody out to get you and you're just going to look silly 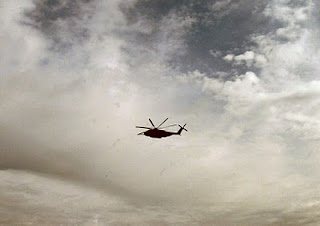 Remember the Black Helicopter scares from some 30 years ago?  (Oh, they're still around?  Do tell.  Have they attacked yet?)  The paranoia parties were going full swing back when Right Wing talk radio was young and the Commies, the Reds, the Pinkos were still such an obvious threat.  The New World Order as conspiracy theory was shiny new, and we in the Detroit area got a kick out of tuning in nearly every day to Mark "Excelsior!" Scott striving mightily to warn his followers about the dangers of big, nasty, secretive, elitist government.  According to Mark and his merry band of conspiracy-addicts, there were secret facilities hidden deep in the west and along the borders and there were black helicopters in the skies and Russian tanks under the trees and it was all a part of a New World Order plotting to rule the planet and make us all slaves.  Danger was all around us, and we were idiots if we couldn't see what was coming.

So what's the natural progression, considering that the New World Order in all its blackness is honest-to-God almost almost here?  Well, if you've got any brains at all, you strap on your guns and saddle up and then you go to wherever the President of the United States happens to be, or at least to wherever a prominent Democrat happens to be, because. . . .

Because you have guns and you know how to show them.

You could be honest, but you've seen from past appearances by everyone you've ever admired that you don't have to be honest.  But if you were honest you might have to admit that the alleged threats to our republic from the black sites and the black helicopters pale in comparison to the fact that, even after all that jawing, that fear-mongering, you're still stuck with a government headed by a man whose skin is dark and who has a hint of the dreaded Muslim somewhere deep in his past.  And on top of that, he's a Democrat.  And on top of that, there are more Democrats than Republicans in the house and the senate.  And you hate that.

Look, I know life is tough for you guys, what with all your hollering going for naught, but honestly?  Nobody you're setting your sights on is out to get you. Nobody at those get-togethers is suddenly seeing your wife and kiddies as prey.  When you carry a gun to a public place--especially a place where politicians and their followers gather--you might as well be carrying a sign that reads, "Dick Cheney and the Neocons scared the hell out of me, but just because I can't think straight doesn't mean I can't shoot straight."

(By the way, that picture at the top of the page?  I took it from a fifth floor balcony, right out in the open, and I lived to tell about it.  It most likely was a Marine helicopter; there are Marine bases to the north and south of us there. One thing I know for sure:  It was on our side.)